Today before the game Joe Torre took the line-up cards tothe chief umpire himself.  Since when does Joe take the line-up card
out himself, except during the World Series?   He went on to shake the
hand of every umpire.  Except Jeff Nelson. 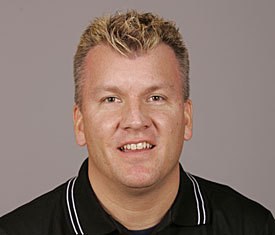 When I turned on the radio this afternoon, before the Yankee-Angels
game at Yankee Stadium, Suzyn Waldmann, WCBS Radio color commentator,
was telling that story.

NOTE:  If the NY DAILY NEWS (or anyone else) covers this story, they should credit Suzyn Waldmann for the idea. Anthony McCarron, who was a guest of WCBS Radio booth during the "DAILY NEWS 5th" inning, said he had not noticed when Ms. Waldmann mentioned the line-up card and hand-shaking routine.  They discussed yesterday’s post-game report with John Sterling, who calls play-by-play during the game.  He said he had been struck by how intensely Mr. Torre repeated the sequence of events that led to the game-ending call by Jeff Nelson.

I enjoyed the game at Yankee Stadium yesterday, my first of the season.  We lost to the Angels, but Wang kept us in the game, and Mo closed us out beautifully, 1-2-3.  Our bats q up about halfway through, and the slumping players got on base by hit or walk — Cano, Melky, Abreu.  A-Rod hit a single and fielded well.  Mank…witc (However you spell it — first baseman, #11) got on base and made an incredible stop.  Damon pinch-hit a single in the 9th.

Early in the game I joked to Floraine Kay — who got me these 2 tickets for my birthday a long while ago —  that John Sterling must be appreciating the home plate umpire, who was calling the pitches expeditiously.  (Mr. Sterling can be eloquent and very funny filling time while waiting for the more deliberate umpires to signal  "strike" or "ball.")  We didn’t know his name at the time, but that home plate umpire was Jeff Nelson.

Throughout the game, we noticed a number of questionable calls which could have affected the score of the game.  Having forgotten to bring my radio, we were cut off from what was apparently a lively discussion, particularly at the end of the game.

Thanks to Floraine Kay for this snippit:

As they cover today’s interleague game against the Red Sox at Fenway, the Atlanta Braves radio broadcasters It’s take note of their surroundings.  They like the location of their booth, for instance.  But, wow, these northerners know how to spend their money.   A season ticket on the Green Monster costs — can you guess? — $27,000 !  For anyone thinking "I could do that," he added, "Who buys one?!"

GM notes: Proctor to prep as Possible Starter for Yanks

"We’ll probably have him proceed and prepare as a starter, because you can always go the other way, slide him down and reduce his workload. But it’s hard to go the other way.  But that’s for another day."

In 2005, Scott Proctor was a starter being squeezed into a reliever’s innings.  I used to grimace when I heard that he was warming up in the bullpen.  Floraine Kay and Marc Marc can tell you how I would repeat myself whenever he failed, announcing with familiar emphasis that the should have expected this, as he was a STARTER, not a reliever, that you could tell by how he used so many pitches and how he approached the at-bats.  Early in the 2006 season, Proctor stared down death and helped his baby daughter recover from a life-threatening heart condition, he re-joined the team a little late and was nearly flawless as a reliever.  I do not know what happened, and I wrote about this transition from starter to reliever at the time.  In fact, back in 2005, I complained that he was being shoehorned into a role that did not fit.  (In 2005, we kept hearing that "they" "loved his ‘stuff’" and were willing to put up with his struggles.)

So now, back to starter.  Wow.  Scott, I admire your Iron-Clad stomach.  Good Luck.

Readers, should the Yankees convert Proctor back to a starter now that he is a successful reliever?  What about the Mets’ Aaron Heilman, who shares the profile, and who has been quite vocal about his desire to return to starting?

Nothing makes me remember that part of the world still makes sense like going to Yankee Stadium for a game.  I’m on my way, will add later tonight.  One plug for StubHub:  Our Tier Reserved tickets accidentally were sold to someone else, and StubHub made good on their guarantee and replaced them at the same price — with Main Reserved MVP seats!

Floraine Kay and I agreed that this was an especially fun game to watch in person.  Although homeruns are dramatic–and I will never turn one down–I am so glad that we have returned to the "small ball" style of play, which I find more strategically interesting and also more depenable than and the homerun style of game, in which we sit back and hope that someone expensive hits the ball out of the park.  Frankly, I found that approach a bit demeaning to all our players during the year or two when we were acquiring sluggers with abandon.  Runners gave up racing to base, fielding got sloppier (or was that my imaginaion?), etc.  Anyway, now we have a lot of National League-style movement going-on on the basepaths, with swift basehits, double steals, and scoring.  Nice.  Even A-Rod and Giambi settled for basehits, and it was a good thing.  A-Rod’s New York fans are determined to support him, even through strikeouts, and he got cheered in a big way when he connected for a single, and again when he stole second.  Even when he was thrown out at home, the crowd was cool.  The closest thing to a homerun by a Yankee was a roaring double by Miguel Cairo.  Maybe he is strength training.   He was fabulous.  At bat, he got his own special Main Reserved MVP cheer.  THAT was cool.

AJ Burnett seemed to burn out.  Floraine thought the volume and intensity of the crowd might have worn him down toward the end of the 6th inning.  Reliever Accardo kept us quiet for over an inning, but Tallet let in 1 more run.  Jaret Wright let in only 1 run, in what would have been a bit of a pitching spectacle  were it not for the tremendous infield assistance — especially the Jeter-Cairo-Giambi double plays.  Outfield there were some big saves, too — one by Johnny Damon for Villone, one by Melky Cabrera, and a potentially damaging one in the 9th, for Farnsworth, by Bobby Abreu, with his bright orange glove, on his first day as a Yankee.  Farnsworth closed out the 9th, once hitting 100mph.  I had never seen that before. Wright pitched through the  5th allowing 1 run.  Villone pitched the  6th and part of the 7th, Proctor finished the  7th and pitched the 8th, and  Farnsworth got all 3 outs in the 9th.  The relievers allowed no runs.  What a cliche, relief.

About whom did WCBS radio’s John Sterling say this?  He said it today, Sat. 7-29-06 during the Yankees-Devil Rays game.  The same player had completed 11/12 stolen bases at that point.

It was hard to know whom to root for in this afternoon’s Game 2 of the second Subway Series of 2006.  On the one hand, the Yankees needed the win, and I am a Yankee fan.  Should be cut and dried, right?  The Mets did not need the win.  Even simpler.  But Steve Trachsel was pitching for the Mets against Randy Johnson and the Empire.

Forget the typical pleas for the so-called underdog.  Please.  The Yankees represent, among many things, my willing concession to the intertwining of power, money, and success.  (I was recently gratified to find a similar sentiment expressed on the webpage of a politician I liked.  I’ll have to look up his name.)

I started following Trachsel when he became a Met in 2001, as soon as Floraine Kay suggested that I keep an eye on him.  She has a good eye.  (Check out her Saddleshoe blog, linked to the right on my Blogroll.)  Year after year, he threw pretty good games only to lose them either because the Mets’ line-up was on strike, or because the fielding behind him was anemic.  Factoring in The Great Unravelling that followed the 2000 World Series, Trachsel — who already felt betrayed by the Cubs for letting him go to begin with (he split 2000 between Tampa Bay and Toronto) — walked into a clubhouse that was infected from top to bottom with mindgames, machinations, and backroom deals.  What I remember is that the callers to the Joe Benigno WFAN show, which was on late nights back then, could say nothing good about this man.  Sell him, get rid of him, he stinks, and much more colorful, less creative suggestions were made, and he wasn’t even bad.  Good?  No.  But neither were the Mets as a whole.  I’m not sure what they hit behind him that year, but he was 3rd in winning percentage among the 4 pitchers who earned decisions in 20 or more games (also Leiter, Appier, Rusch).  From last in ERA in his first year with the Mets, he went to first in 2002, with 3.37, beating even Leiter who had 3.48.  He and Leiter both posted .500 seasons, not bad in a season when the Mets won less than 47% of the time and had the worst fielding percentage as well as the highest number of errors commited in baseball.

Circling back to yesterday’s post, 2002 was when I first grew suspicious of some of those who call themselves "diehard Met fans" because they truly sound as if they hate the Mets.  I may boo less than the average fan, but I can identify a [self] hater when I hear one.  They are still calling-in to WFAN with the most insulting commentary on one of their steadiest pitchers, who never let himself get embroiled in the soap operas, even during the most turbulent years.

So, am I glad Trachsel won, holding the Yankees to 2 in front of Brian Cashman and George Steinbrenner for over 6 innings?  YES.  Did I hope the Mets’ bullpen would give up the game?  YES.  (In light of a post earlier this week, I must confess that I share in some guilt:  As soon as A-Rod hit his 25th home run off Aaron Heilman in the 8th, I knew any hope of a comeback was futile.  Is that backward logic, or what!)

I am, by the way, worried about Trachsel’s health.  Willie Randolph saw something and pulled him immediately in the 7th.  It turns out that his groin tightened after a fielding play, having aggravated an injury that has nagged at him for a couple weeks now, according to Marty Noble, the MLB.com Mets correspondent (Another article, with more detail about the injury, is here.)