True he gets stronger as the regular season goes on, and he pitches well out of trouble. But he has been less than stellar in prior postseason appearances with Cleveland. I have avoided exploring these here. Let’s hope I don’t need to feel that need. He does seem to have filled-out his potential, paradoxically-speaking (I was so glad when, still in Cleveland, he told critics he was not going to focus on losing weight, just on aerobic conditioning. Funny how fellow big lefty David Wells addressed this issue differently! He is providing commentary on the TBS broadcast of this evening’s ALDS Game 1 vs Minnesota.)

…which means he’s wise and I don’t have to repeat myself to you.

Of course, he’s (at metsreport.com) talking about the Mets, having decided El Duque should retire after today, with 3 weeks left in the spring season. (As usual, I find Met fans too hasty with the eject button.)

Wish the YANKEES would bend an ear.  Do I necessarily think we need a 5th starter, exactly?  No.  Do I necessarily think Wells has starter stuff all season?  No.  Could he warm up the season as long relief, lending some stability to the bullpen in case the young starters break down occasionally?  WOULD he?  Could he deal with a contract reflecting non-starter status?  Or, maybe the question is whether the Yankees — or any team — could deal a contract that compensates a respected starter for stepping into an irregular schedule, with the understanding that — at the end of the season — he would have a place in the rotation unless his pitching is under an agreed-upon performance indicator.  (A 6th starter?!  Why not!  We can afford it, especially with 3 young ‘uns.  More than likely, however unfortunate, is the possibility that one of the 5 starters will be injured by then, or will at least need to be spelled.)

Wouldn’t it be nice to sigh at the start of postseason, which for him is like midnight to a nightowl, "Ahhh, all’s Wells."

It even goes beyond retiring as a Yankee.  Did you know that Ron Guidry was his idol growing up!  Uh, huh!  Wait ’til you hear this — in his first MLB start, his opposing pitcher WAS Guidry.  Take a look at the symmetry — closing out his career with Guidry as pitching coach?!

And, wasn’t David (David Wells, for those of you whose needs I have rudely ignored) undefeated as a Dodger until this week, when he took care to take LA out of contention himself, in plenty of time to sneak onto our roster?

You know he’ll pitch wherever he’s needed — as a starter, out of the bullpen, whatever.  He and Clem could combine for a game.  Now that’s  symmetry.

Let’s make nice.  OK?  Please?  So little is going well, even in my baseball social life.  This bone would make so many dogs happy.

David Wells Loses His Win Again 6IP, 1ER.             June 26, 2007
San Diego beat the Giants 2-1, but a blown save by, of all people, the very reliever whose retention he had  championed offseason (Scott Linebrink) took away his W.  A tightly-pitched game overall, though Wells gave up an unusually high number of walks (3), for him.   Maybe it is more accurate to describe it as a tightly-managed pitching game, at least by the Padres, who used 6 pitchers to keep the Giants from scoring more than 1 run in 10 innings The 6th was Trevor Hoffman, who earned his 20th save.  Only Zito — who went 8 innings — and Meredith pitched for the Giants, and they kept the Pads to 2 runs in 10.  Not bad, eh?

Ever wonder what it’s like being Doug Balsley, the pitching coach  for Padres’ manager Bud Black?  As pitching coach for the Angels in his previous job, he looked intense and hands-on, if you know what I mean.

**SPECIAL NOTE**  I have a bad feeling that Andy Pettitte is going to win the YEAH, YEAH, YEAH Award of the year.  Today fit the bill, and I haven’t the heart to explain.  If you can stand it, listen to the game, bad umpire calls and all.  Calls that favored the Yankees, mind you.

Wow. What a Weekend. Well, at least it’s the Right Sox tonight. A breather, even if they do win, which is how it’s looking right now. Roger the Rocket looked pretty fat at Pinstripes on the Park last Thursday. Hate to but I must tell you that the audience — just like at the Stadium the Saturday prior — was definitely not swayed by his charms or promise. His promises, on the other hand, were inspiring. He said we’d take the Series this weekend, and we did. We could use a cheerleader from Texas. One who’s on OUR payroll.

I hear from Floraine Kay that we might take Runyldys Hernandez off the hands of the Red Sox. We might have saved some money and the risk of a double agent (ala Ramiro Mendoza working for us in in their clubhouse in 2003 — and then back with us in the minors last year — where is he now?) had someone LISTENED TO ME and bought him straight from Kansas City. It’s hardly a secret that I have a soft spot for oversized lefties like David Wells (San Diego — HELLO, anybody LISTENING?), CC Sabathia (Cleveland), and, yes, Runyldys, who definitely needed some guidance while he was with the Royals. It will be interesting to see where he is.

So we need a fielder who doesn’t have to hit, eh? Um, anybody look at our bench? MIGUEL CAIRO? And, does anyone remember that he makes things happen? Why hasn’t he been working? He worked in April during some shortages, then NOTHING. Even a DH needs SOME time on the field, and he is a good fielder when he gets a chance to play.

Besides Miggy, there’s Super Joe McEwing, former Met, beloved by fans in Kansas City, and now somewhere else, I will have to check. I loved watching him field. Like David Dellucci as a Yankee, Super Joe was everywhere before you knew where to look. Then, there’s Jeff Keppinger, another former Met, though he may have found a home, as I know Ty Wigginton has as a Devil Ray. Wiggington is a bat more than a fielder, anyway. I’ll always remember the story Floraine told me about how, when he was playing 3rd base for the Mets, knowing he was prone to errors, he wrote E-5 on the inside of his visor.

More on umpires, especially regarding this last weekend, to come. 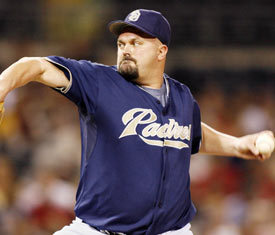 We let Jeff Nelson retire in pinstripes.  We had just re-hired him, again, and he retired before spring training. Could that have been pre-arranged?!  Surely we can do something for a man who loves the Yankees more than he loves his beer and ego combined.  He even has some good games left in him to boot, and we saw him pitch well into the postseason again last year as a Padre.  WHO could this be???!!!!

It could only be….

San Diego sounds like they want him but can only go so far, and you know we can beat that number.  We need another lefty, don’t we?!  Wouldn’t it be cool?  And, if there’s any chance we are going to fulfull Petitte’s wish for Clemens, can we show Wells some respect by hiring him back first?  After all, we let him go the first time in exchange for Clemens, who took some time to fill Wells’ shoes.  I know, I know about Boomer’s second time around with us, and his book and his back and how he wasn’t throwing off the mound, and how some that season’s disappointment on his untimely departure after a perfect first inning with back pain.  Despite the debacle, there was no way he could accept the minor league contract for a couple hundred thousand that we offered him after that year.

Mr. Steinbrenner, PLEASE!  Let Mr. Clemens go to the Red Sox, and let Boomer come back to us where he belongs.  He can even pitch short starts, even out of the bullpen sometimes.  Let him pitch as a Yankee one more year, and retire in pinstripes.

Surely Jeff Nelson would not mind the company, when the time comes.

SOMEBODY, go get Wells those burgers.  He wasn’t kidding, you know, and he earned them, all right.  We had another chance at him when Boston moved him on, and again we passed.  David Wells, who brings luck, a chronic backache, and a special ulcer for Joe Torre when he is on our team, was welcomed back to his hometown Padres, and he returned the favor by clinching for them.  He would be the Yankees’ #1 postseason starter, possibly #2 because of the gout he just pitched through, not to mention the back that threw him out of favor in 2003, when he pitched a great first inning and left us with tired relievers and an extra game to win, which, of course, we didn’t.  Does that postseason-ending collision with Sheffield illuminate why loyal and senior AAA outfielder Bubba Crosby got picked to take the walk when someone had to go this year?

Out of the Bullpen
Create a free website or blog at WordPress.com.