Best of everything to the Indians’ 2006 1st-pick pitcher David Huff, who generously waved to reassure the crowd after A-Rod’s line drive ricocheted off his face into center field in his first start at Yankee Stadium. Sadly ironic is the comparison that analysts have made between him and his star opposing pitcher CC Sabathia, who was also the Indians’ top pick, back in 1998.

I am glad A-Rod showed his concern, crawling-in gingerly from 2nd to stay nearby behind him.

What a terrible game for CC to try to win.

Top 3
CC Sabathia (NYY-P) lost a strike call on a 2-2 pitch to Orlando Cabrera (MIN-SS), opening a stream of 2-out baserunners. Cabrera advanced to 3rd on Joe Mauer’s (Joe Mauer-MIN-C) 4-pitch double and then scored on Michael Cuddyer’s (MIN-1B) single on the first pitch he saw. Mauer subsequently scored on Jorge Posada’s (NYY-C) second passed ball of the game – during Jason Kubel’s (MIN-RF) 5-pitch at-bat, which ended in a strikeout. This put the Yankees behind 2-0 in a game that they were widely favored to win. (The opposition played on little sleep after arriving in New York at 3.30am following a nail-biting 12-inning win over Detroit night for the right to fly into New York.)

The color commentator for WCBS Radio, Suzyn Waldman, at first seemed to chastise Sabathia for his evident disappointment at losing the strikeout, because he had already tried that pitch and failed to get the call. On review, however, Waldman said she could see why Sabathia – and the 50,000 in the stands – felt robbed. Characteristically disinclined to stir controversy, her partner, play-by-play man John Sterling, noncommittally stated that it looked very close.

Effect: Instead of getting out of the inning unscathed, Sabathia was hit-up for 2 runs and threw 11extra pitches – equivalent to a short inning – on a night when his pitch count was already running high with 4 strikeouts before the 3rd inning ended, and starting with Denard Span’s (MIN-CF) game-opening 7-pitch double. The Yankees failed to score first, losing the psychological advantage and comfort zone for their starter, and, significantly, they were facing a pitcher who, albeit inexperienced, was unknown to them, exactly the type of pitcher to stymie Yankee bats since late in the Joe Torre era, if I remember correctly. But Derek Jeter (NYY-SS) immediately pulled a HR to left (very unusual for him), scoring 2, and removing Sabathia’s deficit. In the 4th, Nick Swisher (NYY-RF) doubled-in Robinson Cano (NYY-2B), earning the lead for the Yankees, who held onto it and in fact built on it through the 7th inning. Sabathia was able to pitch through most of the 7th with no further scoring by Minnesota, having earned just the 1 run. (Minnesota’s second run was unearned, because it came in on a passed ball.) Joe Girardi (NYY-Manager) said Sabathia’s performance lived up to expectations, despite the effects of some miscommunication between the pitcher and catcher. Sabathia, who threw 113 pitches through 2 outs in the 7th, appeared to have shaken off any lingering effects of the questionable call after the 3rd inning and pitched a strong game, backed by consistent offense, despite commanding less than his very best , as he said himself.

“No one can predict baseball. No one. Ever.”
-John Sterling, WCBS Radio,
NLDS Game 1, MIN@NYY Top 7, 1 out
re: 2 unlikely runners let on by Sabathia, the second a routine double play turned askew when the ball hit the pitcher’s foot.

I see it is no longer just the listeners who cannot predict this game (as in, “You can’t predict baseball”). This is sounding serious, John! And, it is.

True he gets stronger as the regular season goes on, and he pitches well out of trouble. But he has been less than stellar in prior postseason appearances with Cleveland. I have avoided exploring these here. Let’s hope I don’t need to feel that need. He does seem to have filled-out his potential, paradoxically-speaking (I was so glad when, still in Cleveland, he told critics he was not going to focus on losing weight, just on aerobic conditioning. Funny how fellow big lefty David Wells addressed this issue differently! He is providing commentary on the TBS broadcast of this evening’s ALDS Game 1 vs Minnesota.)

By the time I came in from O’Hare on Monday April 2, the anticipation of Opening Day had ended,  with the Northsiders’ loss to the Reds in Cincinnati with Zambrano falling to Harang and the Southsiders’ self-defeating home opener in which Contreras finally left the mound with a 63.00 ERA, leaving Cleveland’s starter Sabathia to win handily if shakily.  (Yankee fan that I am, I have always said with goodwill, God bless the White Sox if you can get Contreras to pitch for you.  And, you did.  Once in awhile, in moments like this, deja vu floods all over again, and I have to remind myself that he’s not mine any more.  Don’t worry.  He always seems to come out of it for you. Sigh. I was so glad to get Loaiza in return.  Wish we still had him.) 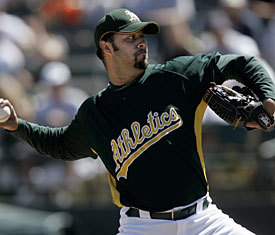 Sports radio was mourning the joint losses and that’s about all it was doing.  I got no serious recaps, and even heard nothing about Sabathia — who had given his team an injury scare in the last game of spring training, leaving everyone wondering if like last season he like Loaiza (Oakland) would be spending an early portion of the season on the DL.   (Right- Photo of Loaiza by Jeff Chiu/AP)

In fact, I would have heard little about either game  without settling in for the late night with The Score, WSCR, and even they were covering college football — while acting cute — when I tuned in.

I avoid contrasting cities because it smacks of measuring siblings against each other and I hear that’s bad.  Not having any, I wouldn’t know, but I do not want to step on toes, so I will say no more than this:

In NYC, even left-leaning news & talk radio AIR AMERICA  (1600 AM)  gives better baseball detail about important games (Opening Day, games against Boston, post-season games) than I heard about the Cubs or the Right Sox on sports talk radio here.  I’m sure there were the usual postgame shows, but really!

Thank goodness for MLB.com Radio and TV!   I subscribe to the premium package and I recommend it.  Years ago, I started with the audio alone, and stayed with that for a couple years.  It’s a terrific deal, and when I had access only to my home dial-up connection, it was the wisest deal, too.  Can you believe that we can watch or listen to Vin Scully any time we want?  If it’s just on audio, it’s $14.95 for the whole season!!  No, I’m not being paid by MLB.com!  I was just so glad to have it when I couldn’t find any late night baseball talk radio!

For a general-interest European publication, Monsters and Critics
does a pretty good  job with baseball, I’m finding, as I check out
their RSS feeds. They seem to single out my favorites — such as CC
Sabathia and Miguel Cairo — for an exuberant word or two of praise,
and the articles are always economical as they manage to convey the
essence of a game.  Today, "Sabathia dazzled,"April 2
but he did not earn credit for the W.  The relievers gave up his lead,
and Travis Hafner gave the closer the winning run.  CC will take it.
At the end of the season, however, his record may weight  his abdominal
strain of earlier in the season, starting him out with an 11.57 ERA in
his first game of the season on .
Between that abbreviated outing and today’s no-decision, he has lowered
his ERA to 3.29 over 20 games, and as of now his August ERA is .78  His record?   .500(8-8). Go figure.  Just don’t judge by his.

Sabathia has not been consistently rewarded for his excellent pitching over his several starts.  On August 4,
for instance, pitching on 3 days’ rest, he allowed one unearned run on his own error to lose the
game 1-0 and be swept by the Tigers.  At Fenway on August 1, the cardio maintenance routine he has adopted seems to have helped
the hefty lefty keep pitching through 8 innings of high heat during a
dangerously hot period in the northeast, salvaging at least his game
out of the series by keeping the ball out of the hands of the Indians’
sensitive closer-in-training Fausto Carmona, who seemed unsettled by
the intensity and volume of the crowd.  As it was, Fernando Cabrera
earned 2 runs in the 9th.  Fortunately, the offensive production had
been high, and the Indians and Sabathia earned their W.

Notice how John Sterling has had it in for Shawn Chacon the last couple times around, especially time before last?  Unless I missed it, he didn’t even get a rehab start off the DL, and then Torre lifted him too early last week, leaving us to hear nothing but how he supposedly can’t last more than 5.  Anyway….

Look’s like Loaiza had to assure us that it was just the Rocky Mountain air and that peculiar humidor treatment that they give the baseballs up there that locked jaws like mine in the desire for disbelief as he blew his third start after 2 great outings off the DL.  Last time out, he was solid and LONG — went all 9.  Hmmm, are the Yankees noticing?

Take a look at these ERA’s:

For a moment, think about Houston and the White Sox last season.  Now, think about Detroit.  Close your eyes and listen.

Sabathia is pitching tonight, too, against the Cardinals.  Should be fun.  Right, CC?

Jaret Wright was serviceable — dare I say promising? — over 4 innings.
Ramiro Mendoza relieved me.
Mike Myers was 1-2-3
Cox did well though it felt like more than one inning.

Tanyon Sturtze (R-RP) is struggling with mechanics.  He has had a sore shoulder since the end of last season, and he started Spring Training exercises slowly and gingerly.  Essentially, he is overcompensating for his weakened shoulder, throwing too hard at the expense of control.  According Mark Feinsand’s article of Thursday, March 16,  "He has been flying open with his front shoulder, which affects his location, and manager Joe Torre has said on more than one occasion that it looks like Sturtze is trying to throw the ball through the back wall."  hat concerns me about this is that he has fallen into that mental trap in the past, overthrowing the plate even when he was, apparently, not hurt.

Keep an eye on these guys, if you like:

Out of the Bullpen
Blog at WordPress.com.
Loading Comments...